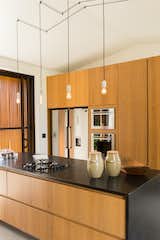 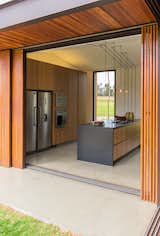 Master suite has Cumaru natural blade cabinet run by Lovato. The slope of the roof was explored in the rooms, valued by the Vertz lighting project. Artzzi furniture 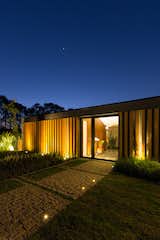 1. How did you land the project and what was the brief?

Initially the customers were looking for a house with volumetry that would hide the roofs, but the regulation of the condominium did not allow the use of flat slabs, nor a built-in roof. It would be our first house with apparent roofs. The required needs program and the size of the plot had the exact proportion for what we believed to be ideal for a single-storey house with plenty of open space for outside living, and so we did.
Haras house came up as a pavilion installation consisting of 3 volumes: two parallels, with NE-SW orientation and a third perpendicular connecting with NW-SE orientation, as an "H". The idea was based on the desire to have the central leisure area in the other spaces of the house, and with the proposed implantation, we were able to create two outdoor living areas: a main one with a deck and a swimming pool and a secondary area with a spa, a water mirror and a bonfire separated by the perpendicular volume and visually connected by the transparency of the sliding glass doors.

2. What was significant about the site?

The land chosen within a stall in the interior of São Paulo, concentrated a number of positive aspects for the design of the project: views, large plot, solar orientation, generous setbacks, high soil permeability, no outside walls.

3. What was the overall design goal?

The simple volume and purity of the gable roof in all 3 blocks of the house ended up contributing significantly to the harmony of the whole and to the desired country house aspect, which was further strengthened by the use of natural materials such as the stone coating on the gables of the walls and the use of the wood in the panels of doors and slatted of the facade.

4. What was the color pallet?

The project explores in exterior areas the colors of natural materials such as the wood used in the slats of the whole facade of the house, the roof, also wood but with a shade of gray and stone walls. The contrast is quite striking with some internal areas, where the walls and white lining create a neutral and minimalist space.

5. What was particularly challenging?

The main challenge of the project was to create a contemporary home using sloped roofs, in a minimalist architecture using natural materials. This challenge sought to coherently insert the project in the place that was built, a condominium in a stable – called “Haras” in Portuguese which gives the name of the house, with an air of farm in the interior of São Paulo- Brazil, a refuge for the tranquility at the weekends.

6. How does this project compare to other projects you have completed?

This project differs from others for being a single-story house in a large terrain and with natural landscape around it. The fact that the house is single-story provided a widespread deployment in the land that generated direct relations of all the environments with the outdoor areas landscaped, which increased the sensation of the built space and strengthened the use of the external areas as a continuity of the built environment.

7. Could you please go into detail about a few pieces of furniture, including why these were selected?

The pieces of furniture were selected especially for each room, proposing an integrating of the spaces. The sofa in the living room, for example, integrate both spaces, the fireplace and the outside gardens. The mix of materials is certainly a charm in this project. In the dinning room, the wood dinning table signed by the Brazilian designer Theo Egami contrasts with the metal chairs feet by Fernando Jaeger.

8. Could you please go into detail about a few fixtures, including why these were selected?

The lighting is mostly made by points of indirect light, creating a more intimate look in the house. In the social central pavilion, spots were used facing the wood lining, creating a light effect on the wood. Some interesting pieces have been used in specific spaces, such as in the kitchen, hanging with the exposed wiring that run through the wall and ceiling until they reach the bench and lavatory point, where the architects used hydraulic copper pieces to create a luminaire exclusively to the project.

9. What did you intend to impart with the rooms and how are they different from each other?

The flat distribution of the house program gives all rooms and environments a sense of continuity beyond the limit built, since all have direct visual relation through glazed sliding doors with more than 1150 m² of free ground and high permeability index of the ground, have secured a generous area for landscaping that embraces the house by the front, side and back indents, and advance through the central core. The differences between the rooms are related to the user, 1 double suite fully integrated with the bathroom, which has a glazed shower facing the bedroom. There are two other similar suites, also with double beds, but to receive guests in the house and finally the children's room, a suite that has two large beds that can be shared.