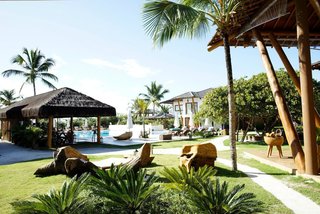 There’s always debate about the effects on the places that host big events like the FIFA World Cup, but there’s no question that Santo André, on Brazil’s Bahian coast, came out of the 2014 installment changed for the better. Campo Bahia was finished just in time for the German men’s national team to move in, and they trained here, relaxed here, and restored themselves here in between matches. And judging by the results — a World Cup win — one imagines that they found it entirely to their satisfaction.

Then again, who wouldn’t? The setting is spectacular, on a beautiful beach next to a charming fishing village, and the resort itself is no slouch either. Fourteen villas contain up to six bedrooms each, but can be subdivided for smaller parties — no need to bring the whole national team. They’re contemporary in style, though full of local character, and they’re outfitted with the full complement of comforts, from flatscreens and air conditioning to wi-fi, if that’s your thing.

Campo Bahia’s restaurants serve upscale contemporary Brazilian fare as well as churrasco, and a detox menu is available if you’re looking to keep it light. A L’Occitane spa is on hand to restore your body, and there is — perhaps unsurprisingly, given the athletic roots of this place — an emphasis on sports and fitness, from yoga and a beachside gym to stand-up paddling, cycling, and professional-quality tennis courts. It’d be a bit much to credit Germany’s win entirely to their stay at Campo Bahia, but it’s not hard to imagine you’ll come back a bit better prepared for life’s little challenges.