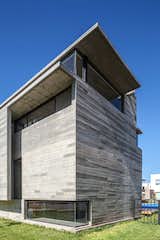 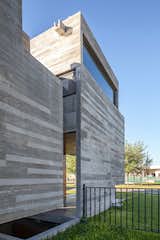 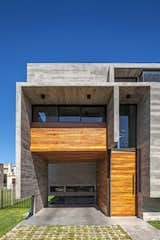 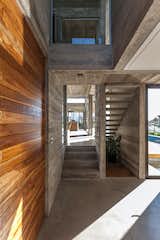 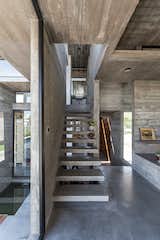 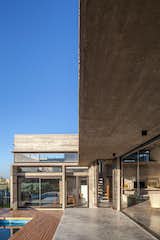 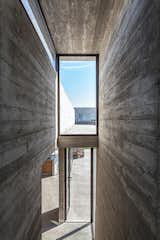 It is a lot in a new closed district, with a young vegetation and very few buildings, so that the house had to be conceived lacking of all data provided by an already established neighborhood. The particular location of the lot, still without adjoining houses, neither added relevant data to the described environment, except those related to its orientation.
The challenge of this request then was to conceive a house which will set their own laws, pending completion of the boundaries lots that, according to the regulations of the neighborhood, shall be only free buildings surrounded by gardens.

The commission
The clients, a young couple with a small child, arrive at the studio following the interest aroused by our concrete houses. They value of them both its material and the fluid relationship established between indoors and outdoors, emphasizing the ones which proposed a complex spatiality. As a special requirement they mark out the possibility that some of the rooms may be highlighted with a greater height in relation to the standard.

The program
Quite free, they only added that they had in mind a family growth, certainly indeterminate over time and on its components. They assumed it was logical to think in three bedrooms, not knowing if all would be used as such, and they let us free to propose. It was clear they needed a generous gathering place with an integrated kitchen, a veranda with barbeque and a swimming pool that should be protagonist.

The proposal
In response to such indeterminate environment we proposed a house with an open interior garden and closed to the street and its future neighbors, defined by two volumes perpendicular to each other that, when intercepted, determine the vertical circulation and, that by its position, leave defined the expansion yard and the pool.
The volume of two plants parallel to the street contains the access and the most private areas of the house and closes itself to the street through concrete walls in different planes that work as screens, letting the light in and controlling the visual. The opposite facade opens frankly to the patio.
The perpendicular volume is on one level and it was proposed of 3.50 m tall and raised on a podium to meet the request of the clients of having a more hierarchized room, and also get a better view of the garden and a better relationship with the two floors volume. In this sector develops the social area that stretches through openings from floor to ceiling in an also elevated expansion, which extends along the pool to finish on the grill area.

Light Treatment and Landscape Views
This is a topic that interests us particularly, so there is, in all the projects, a special intention addressed both to control the incidence of sunlight on glass surfaces as to improve natural light as a project material which brings wealth to the living spaces.
If we understand the openings as such, not as standardized elements with preset measures and positions, but rather as carved into the buildings which, of course permit ventilation and lighting environments, but also leave undefined the indoor-outdoor relationship, framing the landscape, filtering light, reflecting it on a wall, etc., these perforations will be the result of the special way in which we want to establish these relationships.