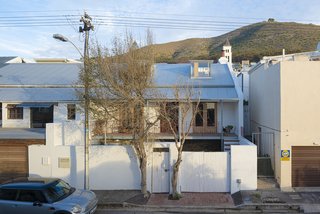 Alterations and additions to a 120 year old Victorian semi-detached home in Green Point, Cape Town completely transformed the existing single storey cottage. The property suffered from a lack of maintenance and careless additions and patch-ups that took place over time. This led to the reconstruction and remodeling of the roof and rear elevation to give the house a much needed new lease of life.

The house historically formed part of a series of 3 identical cottages called Arklow I-III. From the front, the semi-detached house appears almost unchanged, except for the addition of two new dormer windows punctuating the roof plane. The existing stoep was replaced, closely resembling the old one, but executed in a contemporary language to expose the textured stone foundation walls behind. In contrast to the conservative approach to the front façade, the rear of the house presents a completely new building.

The double fronted character of the existing structure made it possible to divide the house into two zones, with private spaces on the one side and public / shared facilities on the other, with both zones benefitting from north and south light. On the ground floor the main spatial organization remained in keeping with the original layout, with the addition of a small bathroom and staircase leading to a new 1st storey. A new courtyard was opened up at the rear, to allow light and ventilation into previously unlit and unserved spaces.

On the new first floor a main bedroom and bathroom completes the ‘private zone’, whilst a study overlooking the living area below and opening up onto a terrace with views towards Signal Hill extends the ‘public zone’. The new double volume space is unusually generous in relation to the scale of the cottage and exposes the existing roof trusses to the living room below. Redundant roof trusses removed from the existing roof space were used in interior detailing.

The new work is predominantly executed in standard South African Pine timber. Existing features and finishes were preserved where possible and used in combination with a new restrained palette of brick, natural stone and timber, exuding warmth and tactility.

Rainwater is harvested from the roof and reused to operate the washing machine, dishwasher and flush wc’s, significantly reducing the residence’s reliance on the municipal water supply.

Interior furnishing showcases pieces from Douglas & Company’s furniture range, including E.1027 Credenza and barcart McSorley’s Wonderful Saloon. The E.1027 Credenza is a nod to Irish architect and furniture designer Eileen Gray’s seminal modernist holiday home on the French Riviera. Inspired by her Maison Minimum approach, the credenza’s profile and rounded ends resemble the villa’s curved entrance wall. With the addition of slim vertical handles that are rendered in a colour to give a glimpse of the interior colour of the unit. The same vertical handle detailing was then incorporated into the custom kitchen design at the residence. At Arklow Villa III, McSorley’s Wonderful Saloon is placed in the dining area in front of a frameless glass window. The soft light provides an ideal habitat for the much loved houseplants, resulting in the trolley being filled with greenery rather than a favourite tipple.

uploaded Arklow Villa III through Add A Home.
Add your own project for the chance to be featured in Editor’s Picks.

In contrast to the conservative approach to the front façade, the rear of the house presents a completely new building.

Living room, dining room and kitchen. McSorley’s Wonderful Saloon is placed in the dining area in front of a frameless glass window. The soft light provides an ideal habitat for the much loved houseplants, resulting in the trolley being filled with greenery rather than a favourite tipple.

Some of the original roof trusses, removed during the renovation have been reused to create characterful details in the living areas.

The staircase leading up to the main bedroom, bathroom and snug starts as a simple wooden stair, but becomes a steel spiral towards the top.

New roof window with views over the Atlantic Ocean

The kitchen boasts custom-designed units topped with a vibrant green marble. A brick floor extends out into the new courtyard at the rear