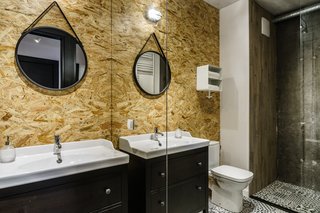 This flat is located in Old Town in Gdansk. Despite its location, in the heart of Gdańsk, I didn’t mean to refer to the sea directly, but only hint at the Northern Europe climate, the vicinity of the sea, and Scandinavia. I wanted to avoid clichés – if we’re by the sea, we could have a lifebuoy on the wall, a bull’s-eye on the door and a view of the pier in the shower in the bathroom. It doesn’t mean that such solutions are always cheesy; there are just too many of them. Our guests aren’t only from the Czech Republic; we also host Swedes, Norwegians, Danes, Brits, Irishmen – these nations have access to the sea as well, and the fact that they spend their holiday in Poland doesn’t necessarily mean they wish to see the sand and breakwaters in the toilet.
There are no large-format prints, sky-blue walls or anchors in this apartment. I began designing it at quite an early stage, namely already at the stage of development works, so I could propose that plaster be not used on some interior walls. What can be more modern and decorative than reinforced concrete? Concrete walls don’t require many additional elements; if they had been plastered and painted white, it would create an impression of emptiness. Now, without any other extra costs, what we get is a decorative wall and a ceiling in the bathroom. I also decided on raw concrete in the shower; using the so-called ‘liquid glass’ allows us to eliminate the risk of causing flood or leaks to the neighbours’ apartments. What’s more, I used OSB boards on the walls in this bathroom – this material is as interesting as concrete, and after impregnation, there’s no risk it would become saturated with water.
I myself dragged this huge piece of wood, now fixed to the reinforced concrete wall with downpipe clips, from the beach in Sobieszewo. It refers to the seaside; I knew that the colour of wood beaten with salt water would brilliantly match the concrete. Together with my family, I went to fetch this element and I still keep on my phone a picture of my daughter, happy in her car seat, looking at her mum sitting on this bough like a hen on a perch. There wasn’t enough room in the front seat because of this long piece of wood.

Lucyna Kołodziejska | INTERIORS FACTORY uploaded APARTMENT | OLD TOWN GDANSK | POLAND through Add A Home.
Add your own project for the chance to be featured in Editor’s Picks.

In the seaside city of Gdansk, Poland, an apartment was renovated with a bathroom clad in concrete and OSB. The OSB adds a decorative element, and it was waterproofed before installation to prepare it for wet environments.