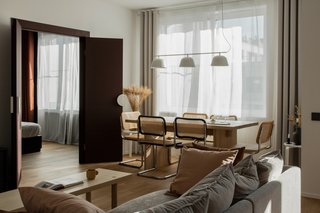 The project was designed by the architects duo Antwe. This is the designers own apartment, so the idea was to personalise it and to make it convenient for work and living.
The apartment layout was based on a balance of areas and ease of movement. There had to be enough space in order not to feel constrained, so a wardrobe was created for personal things. This decision helped to avoid a large number of cabinets in the living room and bedroom.
There were some points of view of the rooms created by the ways of movement. For example, there is a front view of the kitchen from the bedroom. The open doorway created a kind of photo frame, so the architects also focused on creating the composition inside.
It was necessary to make an original interior that would reflect the work style of the architects, but in the same time to stay within the budget.
It was supposed to make a kitchen with an original color combination, not expensive and easy to use. Designers took the Ikea kitchen frame, added custom fronts created at the local production, supplemented it with 30x30 cm porcelain stoneware and emphasised the door handles of the refrigerator. These handles were already used in interior , so they became kind of style for this apartment.
One of the key elements of the interior was the cesca chairs. It’s not so easy to find them in the architect’s own city, so they were bought at a flea market in Finland.

Antwe Design uploaded Apartment, 62 sq. meters in St. Petersburg through Add A Home.
Add your own project for the chance to be featured in Editor’s Picks.