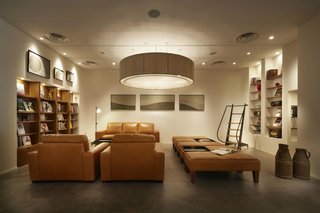 The city of Fukuoka, on the north shore of Japan’s southern island of Kyushu, is far from the first stop for Western visitors to the country. But it’s not for lack of fundamental appeal. Transport links are plentiful, the climate is balmy and inviting, and it’s ranked in Monocle’s Most Livable Cities list ahead of quite a few cities we’ve happily lived in. For our purposes, of course, it’s also important to note that it’s got at least one extraordinary hotel, in the form of the Agora Fukuoka Hilltop Hotel & Spa.

In short, it’s something approaching a ryokan experience, in a city-based luxury-hotel environment. Though urban in setting it’s surrounded by greenery, looking down at the city from its hilltop perch. And while its 48 rooms explore a range of styles, from contemporary Western to Japanese modernist to tatami-style traditional, all of them feel more like splendidly secluded ryokan rooms than typical urban luxury fare.

Add the presence of a hot spring, and the attendant spa, and the resemblance is near complete — and factor in the restaurant, with its elaborate multi-course kaiseki menu, and it’s clear that this place is a ryokan in all but name. And all but size, perhaps — although, even if it’s bigger than a proper ryokan, it’s quite small by luxury-hotel standards. It’s an interesting concept, to say the least, and one we probably haven’t seen the last of yet.