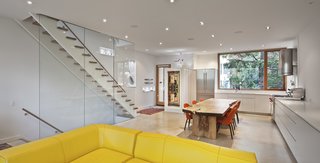 Dissatisfaction with a high-rise rental inspired the construction of a new home.

After a couple traded the house where they raised their children for a condominium above downtown Toronto, they realized they didn’t prefer the shift. Sure, they enjoyed sprawling views and surrounding city life, but they didn’t like the daily routine of a parking garage and an elevator to get to their front door. They wanted to return to a stand-alone property, and because they’re actors, they searched for one that was close to entertainment.

The bungalow they found in the central King West neighborhood had its fair share of problems: floors drooped by six inches across a 25-foot frame and holes gaped through the roof. Architect Kyra Clarkson of MODERNest Inc. decided to scrap the site and build a new home as a second fresh start. “The goal was to create a handsome, contemporary home that nestles quietly into its urban context,” she said. Clarkson created a three-story design punctuated by natural wood accents and an abundance of light, confident that it’s “a home that is built to last, and a home that can accommodate change,” she said.

Kelly Dawson uploaded King West through Add A Home.
Add your own project for the chance to be featured in Editor’s Picks.

“The black siding is contemporary, but the texture of the wood grain is friendly and complements more traditional neighboring houses,” Clarkson said. Windows are fabricated with Douglas fir. Ipe and stained black cedar make up the home’s various decks.

A 13-foot long dining table comprised of silver maple from Urban Tree Salvage is colorfully framed by Saarinen Executive side chairs. Over in the kitchen, a Liebherr refrigerator matches a Wolf stove.

“The [design] is simple and flexible, with an open plan on the first floor that allows the kitchen to flow into the dining and living spaces,” Clarkson said. Concrete floors help to unify the spaces, which feature a B&B Italia Bend-Sofa and Saarinen executive armchairs in royal blue velvet.

Unlike the home’s dark exterior, its bright interior “incorporates large skylight elements, generous windows up to the ceiling, and an operable sliding glass wall facing the garden,” Clarkson said. ROSS Windows & Doors allowed for the airy concept throughout the property.

A custom glass structure supplied by Reale Born Inc. borders the stairs, which are made of solid white oak.

“The interior was designed as a backdrop to the art and life of its inhabitants,” Clarkson noted. “A custom-built wall of display cubes adds an accent of primary color in the second floor hallway.” Solid white oak flooring continues onto the second level from the stairs, and Middlebrook Woodworking Ltd. lacquered that same material for the display cubes.

Benjamin Moore’s Ultra White CC-10 was painted throughout the interior, including in the third floor’s master bedroom. The house has five bedrooms, and two are used as personal offices.

In the master bathroom, Dolomite marble was installed on the walls to complement Caesarstone countertops. Both contrast with the dark Montauk slate on the floor.

“The house is a three-story volume, but in order to minimize the reading of this volume from the street, we set the walls of the third floor back from the front and rear walls of the building,” Clarkson said. Black wood v-joint siding foils Douglas fir wood cladding around the door.