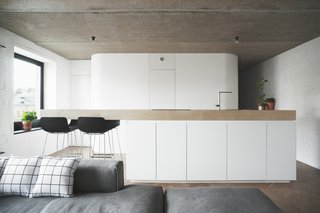 This 590-square-foot apartment was stripped down to admit sunlight and dramatically reveal forgotten surfaces.

Moscow-based Crosby Studios, headed by Harry Nuriev and Dmitry Vorontsov, opened up a stuffy Soviet era apartment and filled it with their firm's custom art and furnishings. Vorontsov explains, “In the early stages of the project, we decided on a light modern style, reminiscent of apartments and workshops of the Soviet intelligentsia. Some walls are white to contrast the other rough, unplastered walls. We decided to keep some of the walls and partitions ‘nude’.” The resulting apartment, which took only four months to renovate for their young couple clients, features a series of prominent textures throughout: rough plaster, brick, oak herringbone floors, rust-washed concrete, and tile. In terms of sight and touch, Crosby Studios’ unique take on brutalist interior design makes for a dynamic experience.

Caroline Wallis uploaded Soviet Intelligentsia through Add A Home.
Add your own project for the chance to be featured in Editor’s Picks.

Crosby Studios eventually found this rust-washed concrete wall underneath many layers of wallpaper. “Nobody even thought to paint it,” explains Dmitry. “The ceiling was polished until it was concrete, and then covered in laquer.”

The long white dresser at the end of the living room pops against the concrete, making it an ideal venue to show off souvenirs, collectibles and art. Crosby Studios also occasionally provides graphic design services, as seen by the eponymous framed print shown here.

A gray Liam sofa is a smart solution for partitioning rooms while keeping an open plan in a small space. Black Enea Lottus stools also enable a joint entertainment/functional area.

The residents included an original set of stools and shelving from the 2015 Crosby Studios collection to show off their house plants.

No space is wasted in the apartment—even behind-the-door corners. A statement bowl chair from the 60s, bought at an English flea market, makes for a stylish reading nook.

To make the most out of a small footprint, Vorontsov experimented with some creative partitions. He explains how “the partitions we built were straight, and then we rounded the corners slightly in the studio" to create a little extra room. "We left the doors without architraves, and punctuated the detail with black doorknobs.”

The plaster on the bedroom wall was too hard to remove, but Vorontsov is glad the clients kept it; its unique texture adds dimension to the six-foot-wide bedroom. It owes its tiny size to two bearing walls Crosby Studios had to work around.

The approximately 4 inch by 4 inch white ceramic tile flooring is typical of Soviet-era bathrooms. Vorontsov sought to update the utilitarian style of the original bathroom with Kludi Bozz fixtures (which he painted black himself) and a graphic IKEA shower curtain.