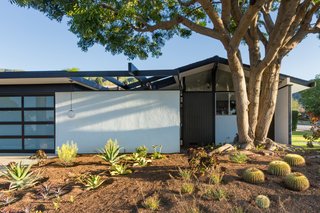 Built in 1963 by architect John Andre Gougeon, this two-bedroom, three-bath property in Glendora, California, embodies the trajectory of postwar architecture in the East San Gabriel Valley.

Gougeon, known for designing the curved, concrete Pasadena Presbyterian Church, studied under Conrad Buff, Cal Straub, and Donald Hensmen at the University of Southern California, and their influence can be seen in the L-shaped home’s relationship with the outdoors and engagement with its site.

Gougeon was originally commissioned by Atlantic Savings and Loan to build a larger development of midcentury residences, but only two homes were completed before the community protested his modern designs, and the bank replaced him with another architect who produced traditional ranch-style homes. The dwelling at 909 Mullaghboy Road has been restored by the current homeowner and landscape designer Antonio Aguilar, and features large stretches of glass and patio spaces that encourage indoor/outdoor living.

The house is being offered at $889,000. For more information, visit glendoramodern.com.