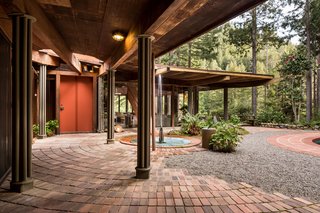 Architect Daniel Liebermann, one of Frank Lloyd Wright’s renowned pupils, made a lasting impact on Northern California’s architecture scene—and you can now own one of the pieces responsible for this fame for $2,795,000.

The tale of the house begins when Liebermann built this house for his parents in 1962, and simultaneously built another one for himself right next door. He re-milled a railroad bridge from Ukiah, California, and used the wood for both of the houses, while also salvaging windows from World War II bomber planes. However, a year after he completed the homes, his parents moved back to Switzerland, while he remained living in his house next door. After his parents rented out the house for a while, they ended up selling it to Jay Little’s parents in 1967, who moved in with their 5 children.

Because these two homes were Liebermann’s first residential buildings—which he completed when he was just 28 years old—he held a special connection with them that lasted until he passed away in October 2015.

uploaded Liebermann House through Add A Home.
Add your own project for the chance to be featured in Editor’s Picks.

Today, everything in the house is either completely original, or was carefully updated by this family who owned and cared for it for 50 years. You’ll find the full listing through Eric McFarland.

861 Lovell Avenue in Mill Valley, California is surrounded by redwood trees and offers that California dream of living an indoor/outdoor lifestyle. Sounds of the Cascade Falls stream in from the East, while the afternoon sun floods the courtyard and swimming pool to the West.

The original red front door leads directly into the living room, which has oak parquet flooring and a radiant heating system throughout that still works to this day.

Liebermann and his wife Eva did the brickwork in the house—the most impressive section being the two arches that hover over the living areas and are surrounded by the home’s old-growth redwood structure.

Liebermann had the steel fireplace fabricated off-site, which acts as the center of the house. Jay Little told us that he worked with many local businesses to get the work done on the house, some of which are still around.

Liebermann built the dining table himself, which is clearly inspired by Frank Lloyd Wright’s furniture. Little told us that the corners were so sharp to begin with, that he rounded out them out to make it work better for his large family, without losing the spirit of the table. It’s made with topical hardwood and is held together with epoxy joineries.

In the corner of the living room sits a round table that the Little family brought from Minnesota. Little’s father made the rounded stools out of garbage cans from Cost Plus and built the custom corner seat to create a comfortable nook.

One of the brick arches connects to the master bedroom, which has an accordion door that can shut one side of the room to the rest of the living space.

The only full privacy that exists in the main house—since everything is surrounded by glass—is in a cube that Liebermann placed in the center of the house. It’s seven feet tall, covered with a thin sheet of fiberglass to let the light stream in from a skylight, and holds two-and-a-half bathrooms. The woodworking here is done with a mahogany finish.

The guest bedroom in the main house holds a built-in desk that was installed by Little’s father, who took inspiration from the lines and shapes throughout the rest of the house.

In the kitchen, the mother of pearl light fixture—which was installed by the Little family in the 1970s—is surrounded by three concentric rings of dark blue tiles from Sausalito-based Heath Ceramics. Liebermann actually installed Heath tiles in the kitchen, baths, pool, and fountain.

Connected by the same room but 20 yards away from the main house, sits the pool or guest house, which has one bedroom and one bathroom. Liebermann built the small round desk shown here, which sits under original porthole skylights.

Shown here is the addition that was built by Little’s father to fit the rest of their large family. He made sure to keep the design, look, and materials as consistent with Liebermann’s main design as possible. They did end up painting the walls white in order to bring more light into the space.

Both the pool and fountain feature original blue vertical tiles from Heath Ceramics, both of which are still functional.

A huge rock that Liebermann picked out himself as as a diving board into the pool. Liebermann was very proud to design the house in a way that it reflects in the pool when you first walk in through the front gate. The reflection doubles the size of the house.

Little and his father built a tiny office with red Dutch doors under the deck where they could find some privacy or reading time.

The house sits on 1.25 acres of land and has a deck that connects the interiors with the outdoors throughout the property. Little points out, “Some of the old-growth redwood he used has up to 25 growth rings in a single inch!”