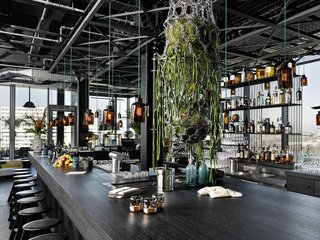 That the 25hours group was going to find its way to Berlin was never in question. Few, however, would have expected them to set up shop here, in West Berlin’s old heart, between Tiergarten Park, the Berlin Zoo and the shopper’s paradise of the Kurfürstendamm. It’s a location that’s truly one of a kind — the name is a reference to the site, a mixed-use redevelopment of some iconic mid-century office blocks that’s now known as Bikini Berlin.

Equally unexpected, at least for an urban boutique hotel, is the near-pastoral setting, thanks to the views over the park and the zoo — the décor is pure “urban jungle,” unfinished concrete mixing with vibrant colors and natural greenery, all the better to accentuate the leafy surroundings. Hammocks come standard, as do large tubs and rain showers, for a bit of a resort vibe.

What the 25hours hotels excel at, of course, is the nightlife, and while Berliners tend to be a close-knit bunch, the hotel manages to get locals and guests mingling, whether it’s in the rooftop Monkey Bar (named for its monkey’s-eye view into the zoo’s primate compound) or the lobby lounge with its live DJ. Meanwhile Burger de Ville operates out of an Airstream trailer, and the hotel’s restaurant splits its efforts between light Mediterranean fare and hearty BBQ, and there’s even a fair bit of conference space, in case you’re in the market for a meeting with plentiful distraction. It’s a bit of a jungle in there.