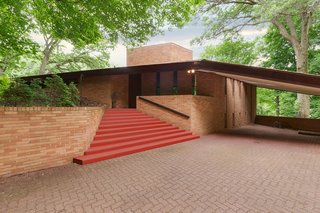 It’s a rare occasion when a home designed by Frank Lloyd Wright goes on the market. But it’s even rarer when it’s being offered for sale by the original homeowners who have lived there for almost 60 years.

Located on 3.77 acres in Minnesota’s Lake Forest neighborhood is a 2,647-square-foot, three-bedroom home that was designed by Wright in the late-1950s. When Paul and Helen Olfelt commissioned Wright to design a home for their family in 1957, he worked on the project until he passed away in 1959. After moving into the final result by 1960, they settled in, and ended up raising four children there over the years.

Now in their 90s, the Olfelts are asking $1,395,000 and have it listed for sale by BERG LARSEN GROUP of Coldwell Banker Burnet. Made up almost entirely of brick, glass, and stone, the home sits on a quiet cul-de-sac close to downtown Minneapolis and includes numerous custom furnishings, lights, and built-in storage elements that Wright designed specifically for the project. It also houses a partially-furnished basement, which the Olfelts requested in order to fit their large family.

uploaded Frank Lloyd Wright's Parklands Lane through Add A Home.
Add your own project for the chance to be featured in Editor’s Picks.

Though this home is close to downtown Minneapolis, it sits on a quiet, 3.77-acre piece of land. When you approach the brick home, it immediately becomes clear that it’s a Frank Lloyd Wright-designed home—thanks to its wing-like shape and Cherokee Red-painted steps.

The open living space is surrounded by large, angular pieces of glass and sits on a floor made with Colorundum in a Cherokee Red, a material and color Wright often used in his work. This space also includes a brick wood-burning fireplace.

The home includes multiple furnishings and lights designed by Wright, including this dining set and hanging pendant light.

Along with vaulted ceilings and sharp angles throughout, the home includes multiple custom built-in storage elements, including the bookshelves that line this living space.

In the kitchen, the same materials and shapes are echoed, including the custom barstools that surround the kitchen island—which bare resemblance to the seating options he designed for the living room.

In one of the three bedrooms, Wright designed a built-in desk and graphic chair. The angular windows and skylights are continued into the bedrooms.

Like most of Wright’s designs, the house is completely integrated into the landscape and was designed to bring the outside in through its placement in nature and its usage of extensive windows.