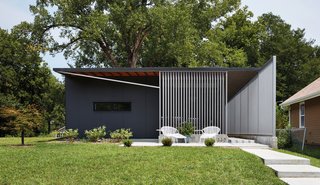 1330 Brook Street house an example of Studio 804’s mission to build creative sustainable housing in established, but marginal urban neighborhoods. 1330 Brook Street is convenient to the vibrant cultural district of downtown Lawrence and to the public transportation system and the bike trails that link the town. It is less than a block from the East Lawrence Recreation Center which offers a wide variety of services and is across the street from Brook Creek Park and its open green spaces, playgrounds and large mature trees.

It is a three bedroom, two bathroom, 1,300 square foot house that makes extensive use of salvaged material and minimizes energy consumption. Sixteen net metered solar panels on the roof provide
up to 4.8 kilowatt-hours of power and will generate enough electricity to operate the house at net zero energy use over a calendar year. It was designed to be clearly contemporary while still fitting into its working-class surroundings of small, unassuming homes.

Studio 804 has always been willing to build on brownfield and undesirable infill sites in urban neighborhoods. The house on Brook Street was built on two small lots in the flood plain of Brook Creek. Since it is nearly impossible to get loans to buy - or to insure - a new house in a FEMA flood plain the previous owner had built up the property grade with compacted earth to create buildable ground above the flood plain. It sat empty for a long time as an odd looking, weed covered mound of dirt. We saw it as an opportunity. Since it cost less than a typical vacant lot in the established neighborhoods of Lawrence
this would make it easier to target an innovative, LEED Platinum certified building that was still relatively affordable.

The insulated metal panels that distinctively clad the house were rejects from the construction of a tennis center being built at the time on the western edge of Lawrence. The panels were perfectly functional but had been rejected due to an issue with the paint that we could resolve. When we began to shape a design around these panels we saw the parallel between Studio 804’s mission and the mission that inspired the prefabricated steel Lustron houses that were developed in the United States after World War II. They were a response to the lack of housing for veterans returning from the war. We wanted the house at 1330 Brook Street to share the spirit of the Lustron design as it serves as a model for how self-sustaining, low maintenance, fully accessible houses can be built for everyone in the future as resource management becomes increasingly necessary.

Being a speculative project we wanted to assure that the small house was comprised of flexible spaces that give the owner control over the use and layout of rooms. It is also ADA compliant and allows unrestricted mobility which also creates a house that will suit the aging baby boomer population that is now looking to downsize and centralize. The kitchen and bathrooms are the only defined part of the plan, otherwise all the spaces can be used in multiple ways. Being built in the flood plain meant the house could not have a basement and since there was to be no attic we had to assure sufficient storage inside the house. Since the north wall has few windows it has extensive built in storage cabinets. To minimize energy consumption the design uses

passive strategies for lighting and to control heat gain and heat loss. The bedrooms, kitchen and living room are arranged along the south wall. At the south and west elevations, the roof extends over the outdoor walkway and patio spaces and is supported by custom made steel tube screens. The deep overhangs and the screens act to manage the amount of direct light that enters the house. They are designed to mitigate heat gain during the summer while still allowing daylight to enter. In the winter, the direct sun light can enter the house and warm the mass of the polished concrete floors. The north wall is highly insulated and has just the openings needed for cross ventilation and daylighting. It acts as a shield against the cold north winds to which the site is exposed.

The plumbing is WaterSense-rated and the Italian-made kitchen appliances are energy star compliant. The light fixtures are fitted with LEDs. Insulation includes both rigid and blown-in cellulose and exceeds the U.S. Green Building Council LEED-rating standards. A signature element of the house is “the notch” where one enters the house. The covered walkway along the south side of the house widens at the living area creating an outdoor room that acts as a foyer for the house and as a screened patio for outdoor seating. It is visible to the living room, kitchen, dining area and flex room through floor to ceiling walls of insulated glass which are supported by a custom-made steel structural frame. Both steel and glass are highly recyclable materials. The soffits of the roof overhangs are finished with western red cedar boards. We milled them from logs once used for railroad bridge trestles that were built in early days of the logging
industry. They had been recently dismantled by the United States Forest Service and the material made available on the secondary market. The interior is filled with high quality and long-lasting materials and components. A hanging pendant in the dining room is an original Louis Paulsen fixture, crafted in Denmark and purchased for reuse in the project. The red oak European kitchen and bathroom
cabinets are topped with cold-rolled steel countertops.

Studio 804 is a comprehensive one year fully hands on design build experience offered by the University of Kansas Department Of Architecture. We are leaders in sustainable design with eleven LEED Platinum projects and three Passive House certifications. Studio 804 is a not-for profit 501(c)3 corporation whose participants are graduate students committed to the continued research and development of affordable, sustainable and inventive building solutions. We design and build a new building every year.

uploaded 1330 BROOK STREET HOUSE through Add A Home.
Add your own project for the chance to be featured in Editor’s Picks.

The hanging pendant in the dining room of 1330 Brook Street House is an original Louis Paulsen fixture, crafted in Denmark and purchased by Studio 804 for reuse in the project.