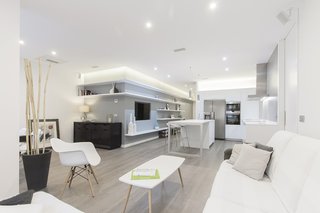 This comprehensive renovation of a 60's house in the center of Madrid was first born as a commission by a young couple with two children who, after residing abroad for many years, decided to return to Madrid to settle definitively.

We faced a previous chaotic distribution that generated long paths and small rooms with very poor lighting. In order to rectify this distribution and at the same time meeting the needs of the new owners, a separation is established between the "public area" of ​​the house, merging the hall, kitchen, dining room and living room into a single longitudinal space; and the "private area" of ​​the house, compacting bedrooms and bathrooms in a separate wing. At the same time, the transition spaces of the house are used to maximize the amount of available storage, switching between open storage in shelves and closed storage in corridors.

The treatment of light has also a particular significance, providing not only a better illumination to the project but also playing an essential role in the way the spaces are perceived, by emphasizing the horizontality through the use of LED contraptions and creating different environments adapting to the use of space and time of the day.

One of the main objectives of the project is to generate a sense of blank canvas on which the owners can gradually leave their mark over the years, using a palette of neutral tones and a minimalistic approach to the materials. In contrast to this sobriety, in the children's rooms vivid colors are used as a way to encourage a more joyful interaction with the architecture.

PENTAMERA uploaded 005.GEB through Add A Home.
Add your own project for the chance to be featured in Editor’s Picks.