The interior space is topped by a lush roof deck overlooking the Hudson River and lower Manhattan.

The residence is located on Crosby Street, which is part of the landmarked SoHo Cast Iron Historic District. Once a manufacturing and industrial area then an artists' enclave, the neighborhood is now a retail hub. This particular loft used to be a light bulb factory, which informed the renovation's materiality. All of the natural light enters the apartment from the living room windows. 590BC worked with Tamara Eaton Design to furnish the interiors, which holds a mix of refined and rough-hewn pieces. A vintage Harry Bertoia chair holds court with a B&B Italia sofa, shag carpet by Shansom Rugs, steel side table from Global Views, and steel Arco coffee table from Room. Throw pillows upholstered in fabrics from Upstate, Maharam, and Romo add punches of color. Photo by Frank Oudeman.

With these goals in mind, the architects put up a partial wall to separate public from private spaces, while playing with sightlines to connect the different areas. Materials like wide-plank oak flooring and exposed metals complement the rich history of the space for a flexible home suitable for entertaining and quiet family life. The flexible layout can later accommodate a third bedroom, and relies on subtle divisions between public areas such as the living space and kitchen. 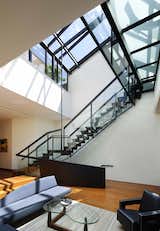 Flatiron Penthouse When violinist Joshua Bell hired Charles Rose Architects to turn the upper floors of an old manufacturing plant in the Flatiron District into his home and salon, he had an unusual request: Make this contemporary penthouse feel like a 300-year-old Gibson Stradivarius violin. And while the central design features of the 4,000-square-foot apartment—like a dramatic oxidized steel-and-glass stair, rooftop atrium, outdoor spa, trellised pergola, and copper-clad chimney—aren’t a strict interpretation of the brief, Rose has replicated the richness and graceful details of the prized wood instrument.

The spaces on the eighth floor of the penthouse are minimally delineated so as to allow for a continuous visual and acoustical expanse which accommodates residential spaces as well as a larger space for performances. 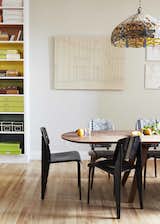 Skylights scattered throughout the space bring much desired natural light to the rooms.

Harlem Town House Renovation After enduring what she calls “the Bermuda Triangle of New York,” otherwise known as the city’s planning department, Alysia Reiner and her partner, David Alan Basche, embarked on a massive renovation of their multiunit building in Harlem. Built in 1909, the structure, which was dark and had already been stripped to its original brick walls before the couple inherited it, became a blank slate for a thorough environmentally sensitive restoration. With help from architect Nicholas Moons of local design-build practice MontesBuild, Reiner and Basche updated their own triplex unit over the course of two years on a tight budget, integrating such elements as natural light, slate and bamboo flooring, and understated modern furnishings.