When the Technical Center was built in the 1950s, it symbolized the core ethos of General Motors. "The initial idea to build a new technical center focused on advanced and innovative product development for General Motors began with Alfred Sloan & Charles Kettering," says Susan Skarsgard, manager of GM Design Archive and Special Collections. "Sloan was the long-time president, chairman, and CEO of GM from the 1920s through the 1950s—decades when concepts such as the annual model change, brand architecture, and automotive design (styling) transformed the automotive industry in America and throughout the world. Charles Kettering, the celebrated American inventor, engineer, businessman, and the holder of 186 patents, headed up research for GM from 1920 to 1947."

The campus features low-slung buildings oriented around a lake. Steel, aluminum, glass curtain walls, and colored glazed brick end walls make up the campus's material language. "Sloan approached Kettering in 1944 with the idea to build a new product development campus, but initially they did not have any preconceived ideas about the architectural design of the campus," Skarsgard explains. "However, the influential chief of GM Styling, Harley Earl, engaged a reticent Sloan and Kettering to consider this project as an opportunity to do something significant with the architectural design of the project."

"Earl convinced them that the architecture itself should reflect the importance of style and advanced engineering at GM," Skarsgard says. "Kettering argued that he wanted 'solid, functional buildings that don’t detract from what we do inside them...we don’t need fancy.' Earl responded 'Ket, I don’t want fancy, I want significant....we are going to be the guys who shape the future. I think these buildings should give out that feeling to the press and the customers and to our employees. Don’t put ‘em in a bank, Ket!'"

Saarinen designed the interior spaces with flexibility in mind. By avoiding the use of many interior columns, he allowed GM to easily adapt and change the buildings' layout to accommodate changing needs. In the Research building's lobby, a dramatic staircase—one of Saarinen's specialties—provides the architectural focal point. 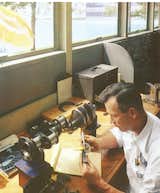 As the manager of the GM Design Archive and Special Collections, Skarsgard has been collecting ephemera from the history of the Technical Center. She's amassed an incredible array of photographs, newspaper articles, and marketing materials from when the Center first opened in the 1950s. The caption accompanying this image reads: "A view of the patio and pool contributes to precision engineering"—a statement that reflects GM's desire to provide inspirational surroundings for its employees. Saarinen considered every element of the project in is design, including the machinery's color when planning the interior schemes.

The cafeteria in the Research building was outfitted with furniture of Saarinen's design. Though the center was completed over 50 years ago, it remains symbolic of what the company strives to stand for today. "Since the opening of the General Motors Technical Center in 1956, this campus is still, and again, the place where the future products of this company are being invented," Skarsgard says. "And just as we are continually influenced and inspired by the undeniable legacy of General Motors in the history of American design, this campus and everything it symbolizes, lays a fertile ground for future innovation and discovery." 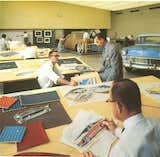 This image depicts the Chevrolet design studio. "It’s a testament to the vision of Eero Saarinen, that his architectural design continues to provide an environment supportive of innovation, exploration and pride for so many of us who are aware of the privilege to work at such an important and beautiful facility," Skarsgards says. "There is a strong commitment by our leadership to maintain and carefully renovate the almost 60-year-old campus, in a way that modernizes its function, but retains its aesthetic integrity."

"Walking past the suspended stairs in our lobby at GM Design, or seeing the giant 'wall of water' on the lake for the first time in spring, or the blue skies over the colored brick in the evening...it's a daily reminder that good design is important and impactful and lasting," Skarsgard says.