Curated by the GRI's architecture department head Wim de Wit and assistant curator Christopher James Alexander, the show includes more than 100 photos by Shulman, all part of his voluminous archive which was acquired by the Getty in 2005 and includes over 260,000 negatives and prints (Shulman died in 2009 at age 98). Maria Velez, who designed all three exhibitions, was charged with collapsing a largely linear story—seven themes—into a challenging four-level, circular space. She excitedly pointed out her favorite Shulman photo of the Water & Power Building, which she had cleverly situated near a massive gear-and-cog implement that had been previously used to control water levels.

Inside the tower, which had supplied the neighborhood with water until it was decommissioned in 1945, iron staircases zig-zagged diagonally through the space, not unlike the interior geometry of the Bradbury Building (the image by Shulman was located on the second floor).

About 200 guests climbed up into the cylinder, following a narrative that began with Shulman's best-known photos, which are all in color, in a ring on the bottom floor. Borja Clemente, a young architecture student with a large SLR camera around his neck, said, like many of his Spanish cohorts, he came there because he had recognized the image on the postcard, but he was shocked once he arrived. "Everyone knows this work, that is why people came here tonight," he said. "But I never thought that one man did all of it!"

The second and third floors—all in black and white—highlighted different themes organized by neighborhood (Wilshire and Century City) and commission (residential and advertising). Ane Rodriguez, who worked as a coordinator at ARCOmadrid, was amazed at the difference of styles represented in Shulman's work, noting that she hadn't thought much of L.A. as a destination for Art Deco architecture until she'd seen buildings like the Bullock's Department Store.

The photos we most closely associate with Shulman—like two women seated in a corner of Case Study House No. 22, the glowing sparks of Los Angeles scattered at their feet—were recognized by all. "It shows a way of life that is how we all imagine this one moment of modernism," said Ferran Barenblit, director of CA2M, an art space in Madrid that had recently hosted a show by Sonic Youth.

On the fourth floor, on a screen positioned in the center of a large circular platform, people could sit on blue square cushions (not unlike those found at Ray Kappe's house—photos on the first floor). This is where Shulman truly came to life, narrating a seven-minute documentary directed by Rani Singh about his work. It was otherworldly to sit up here in this architectural theater, all rusted bolts and iron beams, and hear Shulman explain the famous shot of another theater in the round—the Mark Taper Forum—his distinctive voice echoing up into the domed chamber. 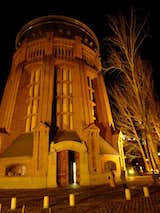 Shulman called himself not a photographer, not a historian, but a businessman: He was always concerned about portraying a building in its best light, said Alexander, as a translator conveyed his remarks to a mostly Spanish audience. "It snowed in Madrid on Monday, and was cloudy and rainy for the rest of the week," said Alexander. "But tonight, the skies cleared up and the stars came out, because Julius wanted you to see this building in its best light." Later, Alexander admitted it was his favorite location the exhibition had been so far. It was not hard to see why it would have been Shulman's favorite: The golden light against the heavy industrial machinery, the perfectly symmetrical interiors, and the unavoidable presence of people in every shot. Alexander grinned. "Julius would have loved this." The show will be on display through May 2, 2010 at Canal de Isabel II.