The Florida International University School of International and Public Affairs is a 56,000-square-foot structure in Miami by Arquitectonica.

The landscape design arm of Arquitectonica, Arquitectonica Geo, is responsible for the Ballet Valet parking garage in Miami Beach. Photo by Dan Forer.

Arquitectonica designed both the structure and the interiors of American Airlines Arena, home to the world champion Miami Heat. The home locker room is one of the grandest in the NBA, evoking a planetarium in this photo by Richard Bryant. 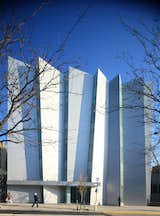 One of Arquitectonica's civic projects is the Bronx Museum of the Arts. Photo by Norman McGrath.