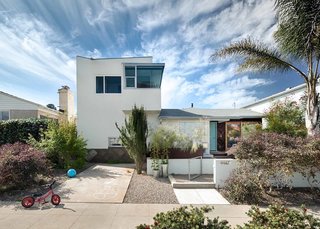 A dramatic garage addition adds volume to this ranch-style home in Southern California.

In Ocean Beach, San Diego, Eliza Slavet and Anthony Burr unexpectedly found themselves growing out of their single-level 1954 ranch-style home with the addition of a first, then second child. The couple had initially remodeled their dated home with the help of architect/contractor Francisco Garcia of the Building Workshop, reconfiguring the layout and cosmetically refreshing the interior. Two children later, the need for more living space for their family became unavoidable. The couple considered moving and started looking around at larger properties, but kept coming back to their own home. It was in a neighborhood they loved, close to the beach, with an open floor plan and large yard. When the decision was made to stay put, the couple again enlisted Garcia to reimagine their space for a second time. Not wanting to lose outdoor space through a possible backyard expansion, and also wishing to avoid dismantling the first renovation as much as possible, the team ultimately decided to reclaim the utilitarian garage space and build upwards in a dramatic vertical expansion.

Sarah Akkoush uploaded An Eye-Catching San Diego Addition with a Curved, Two-Story Garage Door through Add A Home.
Add your own project for the chance to be featured in Editor’s Picks.

The front facade of the home shows the two-story addition seamlessly integrated with the original single-level ranch house. Patterns and details in the new structure were thoughtfully chosen to complement design elements from the original remodel. The concrete stem wall of the garage addition was laid out in a parquet pattern similar to the plywood parquet at the front entrance. The fine sand stucco finish creates visual cohesion between the two structures.

When the team chose to preserve the function of the rolling garage door, it proved to be one of the biggest design challenges of the project. Says Garcia, “We didn’t want it to roll back into the new living space because it would limit our lighting options for the room.” Thus, an unconventional exterior-track rolling door was conceptualized that would not cut into the interior volume. In the backyard that was preserved in the remodel, an olive tree provides natural shade. Maintaining the outdoor area was especially important to the kids as a play area, and Anthony, an avid cook and gardener.

Once the team decided to have the garage door roll up the outside of the structure, they imagined its upstairs portion could curve dramatically along a 27 degree angle. The old garage footprint and 6-foot-wide opening remained the same, and the original sectional garage door was repurposed.

The programming of the garage addition called for a secondary living space and laundry room downstairs, new work spaces for both Eliza and Anthony upstairs, and a master suite. “My favorite parts of the home,” says Eliza, “are the ways in which it’s both spacious and open, and yet also allows you to close off sections of the house from other sections. The kids can be running around crazy downstairs and you can be upstairs and not hear a thing.”

Downstairs, the kitchen and dining room from the original home are linked to the new addition by pocket doors with the same color and motif as the front entry door. Both doors are dotted with clear plexiglass rods in a diagonal pattern. The new living space features a Bensen sofa, Crate & Barrel Ditto Cube table, and Luceplan Agave ceiling light fixture.

Eliza, a writer, and Anthony, a music professor, both gained new office spaces. Eliza’s office is positioned against the angled storefront window, with a custom, site-built writing desk. The slant of the garage addition serves an aesthetic and functional purpose: in addition to being visually dramatic and eye-catching, the curve enables more interior volume without occupying a larger footprint. Adjustable shelving by ISS and colorful clip-on bookends from Vernon Library Supplies complete the space.

The new master bathroom also benefits from its position along the canted exterior wall. The couple initially envisioned a tub for the space, but realized during the design process that it would pose a functional challenge when paired with a push-out casement window. Bringing in valuable light and air, the casement window remained in the final design, while the tub was changed to a shower. The geometric bathroom features a custom walnut vanity by the Building Workshop, ash porcelain tile floor, and Modwalls Lush glass wall tile.

The “lifeguard tower–like” bay window is a bold counterpoint to the original home and offers rewarding ocean views. One of Garcia’s guiding principles is to design “as small a building as practically possible.” This responsible approach was echoed by the owners, who agreed that reusing and rehabilitating the existing house was the best and highest use of the structure. By thoughtfully adding in a way that was minimally impactful to the current structure, the family chose to grow with the home that was already their own.