“The house wasn’t well kept. The renovation was a full interior gut and [an] exterior remodel,” Montalba says. White oak flooring was used throughout the home’s common spaces to create a unified space, and the roofline was lifted to allow for more light.

Montalba wanted to design a property with easy access to the outdoors. A Noguchi glass coffee table and Eames molded plywood chairs sit in the bright living room. 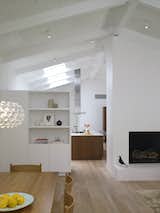 The house’s wood beams were restored during the renovation, and custom millwork was installed for airy privacy between rooms—as well as a place for much-needed storage.

“Skylights were introduced throughout the home to increase light without decreasing privacy,” Montalba said. A Bosch 36-inch, five-burner gas cooktop and a Miele refrigerator add a stainless steel contrast to the kitchen’s white aesthetic.

Along with the interior design’s emphasis on natural light, Montalba also wanted a minimalist look. That sense of “timelessness,” as he says, is achieved with help from the Bertoia counter stools in the kitchen.

A Zuma C Series bathtub sits under a Dornbracht showerhead in the bathroom, which is accented by the same walnut millwork seen in the more public areas of the home.

The master bedroom exemplifies the home’s aesthetic: minimalist and light-filled, with the same white-oak flooring and custom millwork.