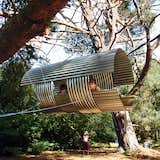 Those looking for a more down-to-earth option might consider wallowing in a pigsty, which is essentially what designer Amir Sanei constructed for his two sons. “The design decisions could be explained simply to them by referring to the needs of flying pigs,” Sanei comments with a twinkle in his eye. Sanei, who is the cofounder of London-based Sanei Hopkins Architects, based most of his design on the “pig ark,” the simple metal domes used to house pigs on farms surrounding his house in Suffolk. But since flying pigs have some special needs, some alterations to the design had to be made.

Sanei elevated the Flying Pigsty six feet off the ground with four ropes slung between two trees “because flying pigs cannot fly far from the ground, and they need good clearance when they come into land.” Entrance to the ten-foot-long, galvanized steel–and–scrap wood Flying Pigsty is via a ladder or rope at back. The entire project was completed over a long weekend in August 2005 for around $850.

Though most times Sanei allows his sons to play freely in the Flying Pigsty, he has strictly forbidden them to enter during moments of twilight when the pigs return to feed. “The boys have permission to use the structure,” Sanei says sternly, “only when the flying pigs aren’t there.” br>