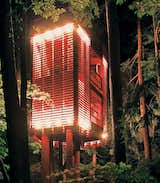 "This was really a parameter-driven project," explains Lukasz Kos, a Toronto-based designer and cofounder of the architecture firm Testroom. "That is, I had to let the trees decide how the tree house would be."What the trees decided, apparently, was that they wanted a gracefully slender, Blade Runner–like elevator lodged between them. They also decided they didn’t want to be too mutilated in the process. Kos responded to their needs with the low-impact 4Treehouse, a lattice-frame structure that levitates above the forest floor of Lake Muskoka, Ontario, under the spell of some witchy architectural magic.He created this effect by suspending the two-ton, 410-square-foot tree house 20 feet above the ground with steel airline cables. With only one puncture hole in each of the four trunks into which the cable is anchored, the trees get away almost entirely unscathed, and the structure attains the visual effect of being suspended weightlessly in midair. At the base of the tree, a staircase rolls on casters upon two stone slabs, allowing occupants to enter and exit regardless of how much the tree house may be swaying or rocking in the wind. Solid plywood walls punctuated by a floor of red PVC constitute the "opaque" base story, which is largely protected from the outside elements. "The idea was to have the tree house open up as it gained elevation," explains Kos. The second story is surrounded by a vertical lattice frame, allowing for breezes, air, and light to filter softly through walls while still establishing a visual perimeter between outside and inside space. At top, the tree house is completely penned in, a suspended patio with a ceiling of sky. br> br>Photo by Lukasz Kos.