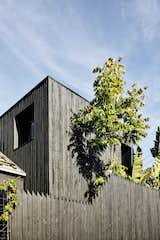 The couple initially intended for the dark cladding to be shou sugi ban. "It’s quite popular now, but back then you couldn’t get it," recalls Chris. "We tried charring the timber the traditional way by stuffing paper between the boards and lighting it, but we were putting fingerprints all over it. We then considered charing it while it was on the facade, but we thought we might burn our house down." Eventually, the couple decided to simply paint the timber, but they selected a finish that allowed the gnarly texture and knots to be show.